For a Better Brain, Learn Another Language 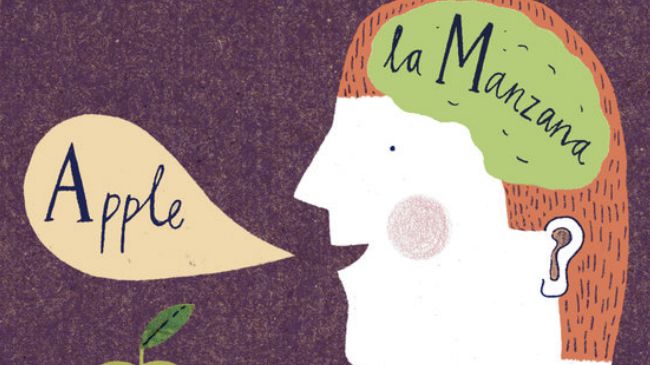 For a Better Brain, Learn Another Language

The cognitive benefits of multilingualism

There’s a certain sinking feeling one gets when thinking of the perfect thing to say just a moment too late. Perhaps a witty parting word could have made all the difference. There is no English word to express this feeling, but the French have the term l’esprit de l’escalier—translated, “stairwell wit”—for this very phenomenon.

Nor is there an English word to describe the binge eating that follows an emotional blow, but the Germans have kummerspeck—“grief-bacon”—to do just that. If we had the Swedish word lagom—which means something is just right—the English explanation of Goldilocks’ perfectly temperate soup could have been a lot more succinct. Or the term koi no yokan, a poetic Japanese turn of phrase that expresses the feeling of knowing that you will soon fall in love with the person you have just met. It’s not love at first sight so much as an understanding that love is inevitable. Keats and Byron could have really used a word like that.

There are many words that English speakers don’t have. Sometimes Anglophones take from other languages, but often, we have to explain our way around a specific feeling or emotion that doesn’t have its own word, never quite touching on it exactly. “The reason why we borrow words like savoir faire from French is because it’s not part of the culture [in the United States] and therefore that word did not evolve as part of our language,” says George Lakoff, a professor of cognitive science and linguistics at the University of California at Berkeley.

Multi-linguals are more perceptive to their surroundings and better at focusing in on important information. It’s no surprise Sherlock Holmes was a skilled polyglot. “Speaking different languages means you get different frames, different metaphors, and also you’re learning the culture of the language so you get not only different words, but different types of words,” Lakoff told me. But the benefits of speaking multiple languages extend past just having access to different words, concepts, metaphors, and frames.

Multilingualism has a whole slew of incredible side effects: Multi-linguals tend to score better on standardized tests, especially in math, reading, and vocabulary; they are better at remembering lists or sequences, likely from learning grammatical rules and vocabulary; they are more perceptive to their surroundings and therefore better at focusing in on important information while weeding out misleading information (it’s no surprise Sherlock Holmes and Hercule Poirot are skilled polyglots). And there’s certainly something to be said for the cultural pleasure of reading The Odyssey in ancient Greek or Proust’s In Search of Lost Time in French.

“Cognitive traps,” or simple mistakes in spelling or comprehension that our brains tend to make when taking linguistic shortcuts (such as how you can easily read “tihs senetcne taht is trerilby msispleld”), are better avoided when one speaks multiple languages. Multi-linguals might also be better decision-makers. According to a new study, they are more resistant to conditioning and framing techniques, making them less likely to be swayed by such language in advertisements or political campaign speeches. Those who speak multiple languages have also been shown to be more self-aware spenders, viewing “hypothetical” and “real” money (the perceived difference between money on a credit card and money in cold, hard cash) more similarly than monolinguals.

One theory on why this might be is that there’s increased psychological distance when speaking a language that isn’t your mother tongue. Researchers in the spending study posited that subjects had less of an emotional reaction to things heard in their second (or third, or fourth) language, perhaps allowing for a more levelheaded decision.

More recently and perhaps most importantly, it’s been found that people who learn a second language, even in adulthood, can better avoid cognitive decline in old age. In fact, when everything else is controlled for, bilinguals who come down with dementia and Alzheimer’s do so about four-and-a-half years later than monolinguals.

“Just having the basics of those linguistic connections can delay dementia.”

Dr. Thomas Bak, a lecturer in the philosophy, psychology, and language sciences department at the University of Edinburgh, conducted the study and found that level of education and intelligence mattered less than learning a second language when it came to delaying cognitive decline.

“It’s not the good memory that bilinguals have that is delaying cognitive decline,” Bak told me. “It’s their attention mechanism. Their ability to focus in on the details of language.”